He has been compared to the late Indonesian man of letters, Pramoedya Ananta Toer, but Eka Kurniawan is averse to that confining, imposing description of “literary figure.” Best known for his sometimes brutal portrayal of ordinary lives, he speaks with Maggie Tiojakin about the roads yet traveled. 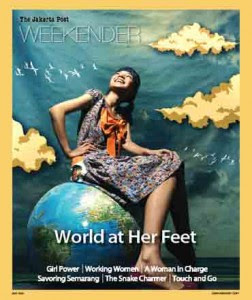 Like many aspiring writers who need to pay the bills, Eka Kurniawan started out as a journalist. The 33-year-old native of Tasikmalaya, West Java, then submitted a few short stories to Kompas daily’s respected literary page, and they were accepted.

“People always asked me how it happened that I had my stories published in Kompas,” says the Gadjah Mada University graduate. “But there’s really no magic to it. I sent [the stories] out to the editorial department, even though I didn’t know anybody there.”

Gradually, his journalistic days of meeting deadlines came to an end.

His first book, which established him as a serious writer, was published in 1999, titled Pramoedya Ananta Toer dan Sastra Realisme Sosialis (Aksara Indonesia) A second book came out a year later, a compilation of short stories called Corat-Coret di Toilet (Toilet Graffiti, Aksara Indonesia.) By 2002, the year he published his debut novel, Cantik Itu Luka (Beauty is Scarred, Penerbit Jendela), he was well on his way to becoming one of the few influential writers in the country.

Benedict Anderson, the renowned Indonesian scholar and historian, in his article, “Exit Suharto: Obituary for a Mediocre Tyrant”, in the New Left Review, writes: “It is nice, after half a century, Pramoedya Ananta Toer has found a successor … the sheer beauty and elegance of [Eka’s] language, and the exuberance of [his] imagining, give one the exhilaration of watching the first snowdrops poke their little heads up toward a wintry sky.”

For some writers, such a compliment would be enough to put their head in the clouds. For Eka, however, it gives him more reason to keep his feet on the ground and remain himself.

“I respect Pramoedya very much,” confides Eka. “I’m very honored to be referred to as Pramoedya’s successor. But, at the same time, I don’t really know what to do with it. I can’t quite envision myself as a literary figure, because I have a hard time defining that label. What is a literary figure? I prefer to call myself a writer, because it suggests a profession.”

It is a profession, however, that gets little appreciation in this country.

Avoiding mainstream topics in his writing, Eka prefers to look beyond the normal stories of people living their day-to-day lives without alienating the essence of life itself. His most celebrated novel, Cantik Itu Luka, talks about a woman forced into the world of prostitution during colonial times. The woman gives birth to an ugly daughter whom she later calls Cantik (Beautiful).

“I try to see things not as they are, but as they should, would or could be,” explains Eka. “Generally, I’m inspired by a lot of things — newspaper stories, TV shows, books, etc. I think writers do have the obligation to expose themselves to what’s going on around them, analyze the reality as they see fit and repackage it in a way that will reach their audience.”

Amid the glut of chick-lit, song-lit and movie-to-book adaptations piling up in local bookstores, Eka finds it unfortunate that most emerging writers feel the need to conform to a generic style and the exploration of conventional themes.

“I’m not saying they’re bad books,” says Eka. “But my biggest concern is the fact that writers today have a tendency to adopt homogenous styles. It’s like they can’t break away from the trend, conveniently stuck in one place.”

Homogenous is not a term used to describe Eka; his short story titles include the provocative “Bercinta dengan Barbie” (Making Love to Barbie), “Lelaki Sakit” (A Sick Man), “Assurancetourix” and “Hikayat Si Orang Gila” (The Tale of a Mad Man).

Agus Noor, a writer with an equally unique storytelling voice, has described Eka as a “storyteller who gladly embraces the inheritance and history of literature from around the world.”

A devoted reader of Chairil Anwar’s prose and poetry, as well as Salman Rushdie’s sometimes controversial books, Eka believes that writers are made by the books they read. When people ask him what it takes to become a writer, Eka always tells them to read more.

“They don’t believe me, of course,” says Eka, chuckling. “They give me this look, as if I’m lying. But that’s the honest truth. The more I read, the better I write.”

Eka now lives in Jakarta with his wife, Ratih Kumala, an accomplished writer in her own right. A multitalented writer with a strong interest in graphic design and comic-book writing, Eka has set his eyes on new projects this year.

“There’s no limit,” he says. “I’m always trying to figure out new possibilities, new themes and new ways of communicating to the readers.”

This profile published by The Jakarta Post Weekender, 28 June 2008.